The Threat of the Waimanalo Paradise Seawall

The Waimanalo Paradise Seawall protects a 3-acre beachfront estate that is associated with the Obama Family and Martin Nesbitt, the Chair of the Obama Foundation. The Surfrider Foundation has consulted with coastal science experts that agree the seawall has destroyed the Waimanalo Beach that once resided seaward of the structure. Considering future sea level rise projections, the wall will continue to accelerate beach loss and shoreline erosion, especially along the beaches fronting neighboring properties that do not have shoreline hardening.

This seawall will cause flanking, or amplified erosion, on the unarmored properties adjacent to the wall and the impact will be exacerbated as sea levels continue to increase in the future. Recent studies speak to the dire need for change in historical practices of coastal armoring, including repair and maintenance of existing walls. New armoring as well as repair and maintenance of existing armoring may lead to 40% of the beaches on O’ahu to vanish in only 30 years. We must preserve our home’s beaches for future generations. 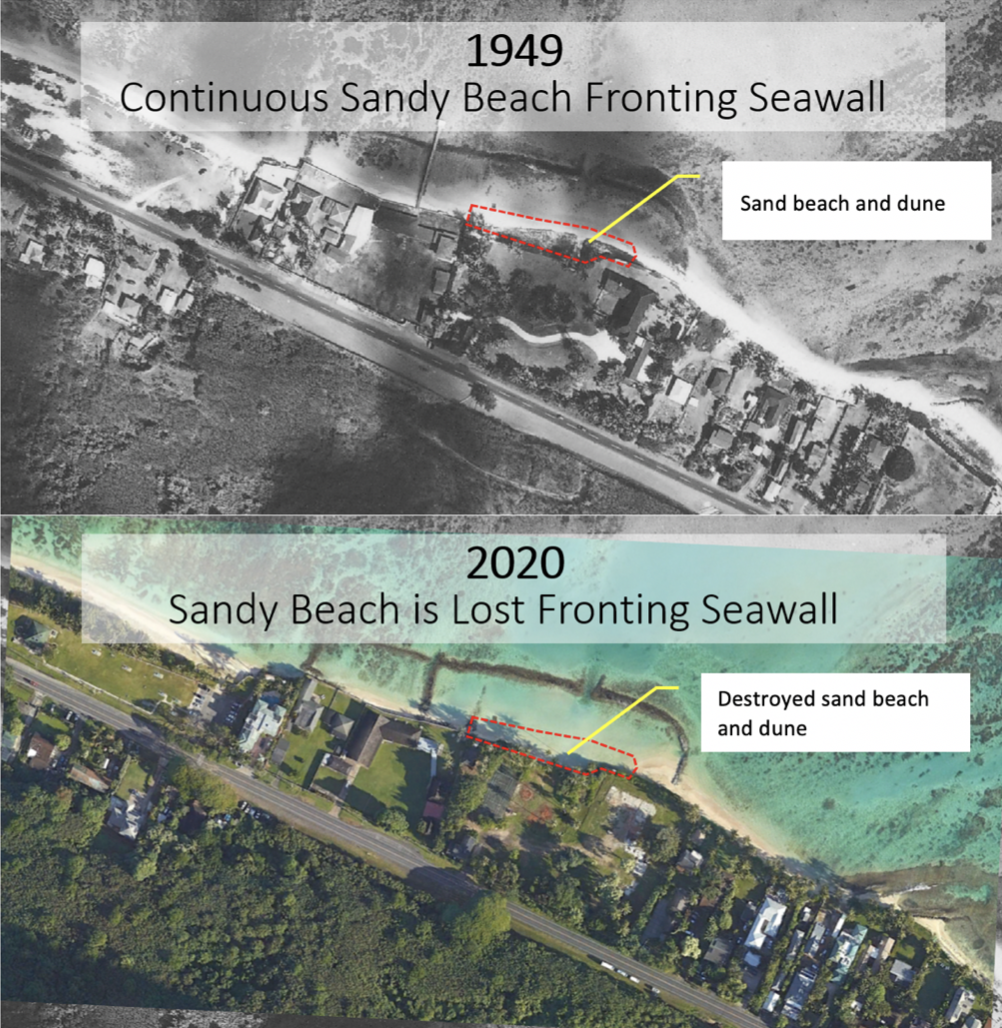 Considering future sea level rise projections, the wall will continue to accelerate beach loss and shoreline erosion, especially along the beaches fronting neighboring properties that do not have shoreline hardening.

The City Government is Reluctant to Protect Waimanalo Beach

Not long ago, a beautiful sand beach and dune existed, but the seawall has caused a complete loss of this public land and resource. The sellers of the Waimanalo property were granted an easement by State of Hawaii officials that grants them access to the beach as if they were leasing the public land – an anomaly under state law. With a one-time payment of $61,400, the state Department of Land and Natural Resources authorized the seawall for another 55 years.

The Waimanalo property has brought detrimental loopholes built into Hawaii’s coastal planning system into the spotlight as the sellers pursue additional environmental exemptions from local officials at the Department of Planning and Permitting (DPP) to expand the seawall further along the shoreline and increase its height despite consistent warnings from scientists to retreat from the coast amidst oceans rising as a result of climate change. The burden falls on the applicant to prove that the existing seawall has not caused the loss of the public trust resources before any new developments can be authorized involving the Waimanalo Paradise Seawall, as well as that the new developments.

The leeway allotted to property owners by government officials is an attack on the historic Waimanalo Beach, which they are constitutionally obligated to preserve, protect and at this point, restore. The Hawaii Constitution states that the beach is both public trust land and a protected public trust resource. “For the benefit of present and future generations… All public natural resources are held in trust by the State for the benefit of the people.” As a political subdivision of the state, the DPP bears an affirmative duty under the Hawaii Constitution to conserve and protect the beach by rejecting the proposed action.

The DPP held a public hearing on Friday, October 2nd, and Surfrider Foundation Oahu testified to request the DPP to reject the developer’s request for a hardship variance, as they did not meet any of the three hardship standards needed to receive a variance.

The DPP must not prioritize landowners over our degrading shorelines as Hawaii’s precious beaches continue to drown. The government should be trusted to prevent property owners from bypassing vital laws intended to protect the public shoreline. The privilege awarded to the Waimanalo property owners demonstrates that this is not the case.  At the very least, if city officials don’t require the seawall to be removed, they should require the owners to invest in restoring some of the beach that has been lost. The seawall could also be moved inland to mitigate the loss of the beach while effectively protecting the property. Should the seawall be removed, the beach would restore itself naturally, and the public trust land and resources would be conserved and protected. There are a number of viable solutions, but to allow our state’s valuable beaches to wash away is not a rational management decision. If the Waimanalo Paradise Seawall qualifies for a hardship variance, the decision would set a dangerous precedent that would open the floodgates for more property owners across the island to justify the redevelopment of old seawalls.

Surfrider Foundation Oahu Chapter is calling for the developers of the Waimanalo Paradise Seawall to move the seawall inland to allow the beach to be restored. Given the vast area of land on this property, moving the seawall inland is the best solution that allows the property owner to protect their property while also restoring the beach. At the very least, the developers should participate in compensatory mitigation measures, which would mean funding projects to restore the beach and pay for the negative impacts of maintaining and extending the seawall.

We, along with members of the community that neighbor this property, are urging the Department of Planning and Permitting to reject the Waimanalo property owners’ dangerous proposal, and consider a solution that allows the once exquisite beach to be restored. The DPP has a legal obligation to reject the application for the Waimanalo Paradise Seawall expansion since a public sand beach exists here and the proposal is not in the interest of the public. We thank the DPP for your thoughtful consideration of the Surfrider Foundation’s request that you reject this shoreline setback variance application for the repair and expansion of the Waimanalo Paradise Seawall and consider the many alternatives offered above. It is your legal obligation, and an important decision for the future of all public sand beaches on Oʻahu. Please protect Waimanalo beach for the benefit of present and future generations.

In November 2020, the City’s Department of Permitting and Planning (DPP) made a decision to grant the developers their requested variance to repair and heighten the seawall. This is a disappointing outcome, and the City has failed to fulfill their legal responsibility to protect the shoreline and the public trust beach resource.

Surfrider Foundation will continue to call for the City & the State to follow the law and Constitution to protect our sandy beaches and beach access for future generations.